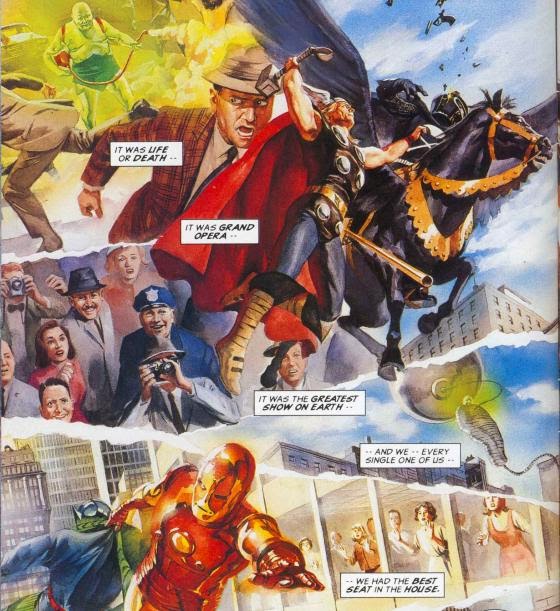 Part of the appeal of Marvels is the fact it takes some of the best known Marvel superheroes and it inserts them into the real world. Plenty of superhero comics are set in something we are told to pretend is the real world, but not many actually manage to pull it off with any sort of realism, and instead the superheroes stick out like characters from Who Framed Roger Rabbit?.

Fans of Alex Ross and Kurt Busiek will be pleased to know that the pair triumphed with their 1994 four-issue story of the emergence of extraordinary individuals in an ordinary society. The story is told by everyman character Phil Seldon, a photographer who dreams to marry his girl and then get a job in Europe photographing the Second World War. The choice of Seldon as a perspective for the action was a wise one; through his very normal, and sometimes scared, eyes we realise how truly special superheroes are. Seldon is a bit of a dope at times, going as far as to call off his marriage to a girl well out of his league, but we’re all guilty of being a bit dopey on occasion.

The artwork in Marvels is jaw-dropping and it is easy to see why it launched Alex Ross’s graphic novel career. The realism of the comic puts you in the middle of the action and it makes it easier to believe in the story. This is important when too many superhero comics make it difficult for you to suspend your disbelief, and subsequently make it tough to relax and settle into the story. Between Ross’s sterling artwork and Busiek’s grounded story, you certainly won’t have trouble believing in Marvels. Your only problem will be finishing it too quickly.

Marvels is so high in my list partly because it is suitable for both long-time readers and novices to the comic book world. The story will give a beginner a fantastic catch up of the backgrounds of some of the greatest Marvel characters, people like the Human Torch and Spiderman right through to the Avengers. It’s a good starting point and it will give you a lot of ideas on where to go next in your graphic novel reading. Although hopefully this site is giving you enough ideas already! Some of the characters you will meet include:

There have inevitably been discussions of the parallels between Busiek and Ross’s reimagining of old superheroes and the work Alan Moore has done in reinventing some famous characters, but after reading Marvels you will see that they do it in different ways. While Moore likes to make major changes in the backstories of established characters, Ross and Busiek instead keep the backstories of characters intact and instead try to wring new developments and themes from what's already there. Marvels will tell you so much more about characters you thought you knew inside out and it doesn't matter how many graphic novels you've read in the past, you'll still find this an incredibly rewarding read.