Read this if you like: Westerns, Tarantino-style violence, angels,demons, swearing. 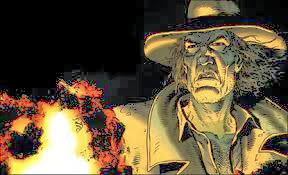 It’s hard to define Preacher. It draws on so many influences and has so many themes, stories and characters that I don’t know what genre I would put it in. There are western elements, with the quick-drawing, revolver-toting Saint of Killers and the ghost of John Wayne who gives the main character, Custer, advice from time to time. Then there’s the whole story of politics within heaven and the unholy union between an angel and a demon which begets a baby named Genesis, a being with enough power to rival God.

Preacher is a mature comic full of death and violence. This is where artist Steve Dillon shines, and he has a field day putting to paper the violence in Garth Ennis script. There’s a scene early on where the first Big Bad – the Saint of Killers – wipes out an entire police force with his deadly revolver. During the scene Dillon treats us to images of policemen getting their faces shot off, and it is extremely graphic; there are noses and chins and skin and blood flying about everywhere.


Added to this is the crude dialogue set down on paper by Ennis, a writer who does love to give his comics an R rating. There’s lot of swearing and hilarious adult humour, and the character Cassidy, an Irish vampire, is especially fond of a well-crafted blue insult. The images and the dialogue mean that this is a comic I will only recommend to adults, but for Preacher that turns out to be a good thing, because it allows Ennis so much scope to take the story where he wants it without having to worry about offending anyone.

As if he’d care anyway.

Preacher has some of the coolest and weirdest characters ever seen in a graphic novel. There’s the Saint of Killers, a sharpshooting angel of Death who dresses like Clint Eastwood, Arseface, a disfigured teenager who tried to kill himself with a shot gun after hearing of Kurt Cobain’s similar fate and subsequently gave himself a face resembling a bum, and the afore mentioned Cassidy, a tough-talking, blood-thirsty vampire who doesn’t give a toss about anything.

Of course there’s also the main character himself, Custer, a cynical preacher who is turned into an all mighty being when the angel-demon hybrid baby Genesis fuses with his spirit.

I was going to end this entry with the question ‘why hasn’t this been made into a TV series yet?’ With the recent popularity of graphic novels becoming TV shows (Walking Dead, Arrow) an entertaining comic like Preacher, one which is blatantly influenced by movies and TV shows itself, seems like a no-brainer. It would be a goldmine for the TV executives and hopefully a great show for the fans. It seems I don’t have to ask that question, because it was announced in November that AMC, home of Breaking Bad and The Walking Dead, have ordered a pilot. Well done guys!

As for you reading this entry though, I suggest you get started on the graphic novels. Volume One is called Gone to Texas and you can pick it up quite cheap on paperback.