7 – Batman: Year One by Frank Miller

Read this if you like: Batman, Frank Miller, origin stories. 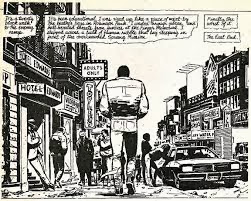 Year One is a Batman origin story written by Frank Miller (Sin City, 300) and illustrated by David Mazzucchelli. It recounts the story of both Bruce Wayne’s beginnings as Batman and Jim Gordon’s fledgling career as a Gotham cop. We follow both men from the moment they set foot in Gotham – Bruce after 12 years abroad and Jim as a cop who has transferred to the city – and watch them adjust to life in one of the grimmest metropolises in America.

Bruce’s goal of course is to both scare the crap out of the criminal hub of Gotham city and to get revenge for the cold-blooded murder of his parents. Miller imagines Bruce’s beginning as a crime fighter to be a tough learning curve; an early attempt to strike a blow on crime sees Bruce fleeing home in his Porsche whilst blood pumps out of an open wound.

Jim Gordon doesn’t fare much better. Transferred in from another police force where he made a name for himself by reporting on his fellow-corrupt cops, Gordon is appalled by the corruption he finds within Gotham’s police department. His story in Year One is of him starting to clean up Gotham’s police department, whilst at the same time trying to catch a new vigilante who stalks the streets wearing a bat costume.

It’s hard to imagine now, but before Miller stepped in with Year One the Batman character had become something of a clown. Full of silly one-liners and watered-down action, the series was in danger of losing the respect of its fans unless it underwent a serious evolution. Frank Miller was the man to do this. He gave the characters in the Batman universe credible backstories, inserted some adult themes into the storylines and gave the whole comic a grittier, more realistic feel. It is largely thanks to Year One that Batman’s popularity has endured and even grown over the last couple of decades. There is no way we would have the recent Dark Knight films if it weren't for the Batman comicbook transformation that  Miller back in 1987.

The aspect of Year One that stands out the most for me is the characterisation. Miller digs deep into the minds of two of the most important characters in the Batman universe – Bruce Wayne and Jim Gordon – and he has a proper look at what drives them. For Gordon, it is the desire to raise a family in a city that is safe. For Bruce it is twofold; to clean up Gotham, and also to clean up the memories of the past that haunt him. Miller makes us care about both men and makes us want to get behind their struggle to make Gotham’s streets safe, giving us a frame of context in which to view any Batman graphic novels that followed.