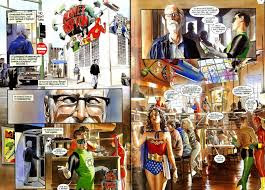 In superhero comics the heroes have always been a minority group in the population of the world. They aren’t like the rest of us; they always have something about them, that little something special that sets them apart from all of us schlubs. That’s why they’re superheroes, and not just normalguyheroes.

Lately though there has been a revision in how we see the superhero, and nowadays it’s cooler to show how human a superhero is rather than how much different he is to the rest of us. Take Kickass for instance; the only thing that sets main character Dave Lizewski apart from the rest of us is 1) he has a desire to do something about the problems of society and 2) he’s willing to wear a lycra bodysuit. He’s not born a mutant or with hands made of dynamite or anything like that, he’s a pretty normal guy.

That’s a blatant example of the humanising of superheroes, but you can see others that are more subtle. The Christopher Nolan Dark Knight movies made Batman suffer some of the dilemmas us normal folks have, and in Man of Steel we see that Superman’s balls are probably the same size as a regular guy’s.

Kingdom Come plays with a theme like this, but instead of humanising a superhero, in this story world there are lots of people with superhero powers rather than just a few. There are probably too many to be honest. And instead of committing their lives to fighting evil or become evil geniuses themselves, these guys are content just to duke it out with each other in the streets with precious little to gain and no point to their fights. They cause enough collateral damage to make the insurers of the Nakatomi Plaza weep, and they actually make a bit of a bloody nuisance of themselves.

At the same time, the older generation of superheroes, the ones we know and love such as Superman and Green Lantern, have all retired or taken an extended leave of absence. A new threat emerges and events soon reach such dangerous proportions that we see our old stars get back into the ring, and like George Foreman when he won the heavyweight title aged 45, it is obvious the old heroes have still got it.

Although it is a cracking story, the star of Kingdom Come and what elevates it into one of the greatest graphic novels ever is the illustration by Alex Ross. His take on what an older-Superman-who’s-now-a-farmer would look like is spot on, and Ross is forced to be imaginative to make the artwork live up to the story.

Waid and Ross both deserve a lot of praise for this actually. They have taken the “What would Batman and Superman look and act like after decades of fighting against evil” theme and they have come up with some really interesting stuff. It is fascinating to see a world-weary Superman living the quiet life as a farmer, and a Batman whose body has to be supported by an exoskeleton after taking decades of abuse (something that George Foreman should look into; with metal bones he could probably win another world title in his sixties).

This is a fantastic graphic novel, but I will leave this post with a criticism and a warning. The warning is that depending on which edition you buy, you may not want to read the author’s introduction because in essence it is a spoiler. The criticism is that some of the story of Kingdom Come requires a certain amount of prior knowledge to get the most of it, i.e. you have to have read some of the character’s other comics before to fully appreciate minor points of the Kingdom Come plot.

Don’t let that put you off though; this is still an accessible work and I promise you that you will be blown away by the story and the art style.