13 - Pyongyang: A Journey in North Korea by Guy Delisle 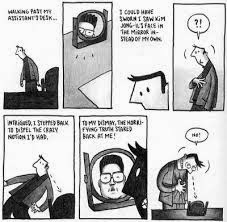 All hail the glorious leader! Pyongyang: A journey in North Korea is one of most terrifying entries in our top 100 best graphic novels list, and it is a scary book about a scary country. It is about a modern day setting for 1984. It is a book about freedom, or a lack of it, and how even in the modern day a state can so completely control the lives of its inhabitants that it even tells them how they must think.

For a country that keeps such a tight veil of secrecy over its inner workings it is fascinating to read a graphic novel that gives us a glimpse on what life is like in the communist state that so few foreigners are given entry to. It is unlikely that many of us will ever visit North Korea or walk on the streets of Pyongyang, yet I feel like in years to come what the people and the buildings within North Korea’s borders can tell us is going to be of massive historical significance.

This could be an incredibly heavy read were it not for the way it is told. We see the story from author Guy Delisle’s perspective, and consequently we learn about North Korea in the same way he does. We share the country’s propaganda and customs with the same incredulity and hilarity as Delisle, and it is a credit to the Guy’s wit that we can find things to laugh about in this paranoid and power mad state.

Delisle's comic personality aside though, in the graphic novel’s 176 pages we learn of a country that simply doesn’t feel like it should exist in this day and age; a country where the people are afraid to say they really think and feel, or even to have an opinion of their own. Delisle is utterly amazed when he hears a North Korean remark that he thinks the propaganda films produced by the state are boring. It strikes him as a courageous thing to say, because by giving such a simple opinion this individual was in fact risking severe punishment, which can range from forced enrolment in a “re-education camp” all the way up to death by firing squad, depending on what your crime is.

This is an interesting, serious and important comic, but it is not one that is action packed. The plot moves at an even pace, one that I think was chosen on purpose to reflect the monotony of life for Delisle in North Korea. I mean, he wasn’t allowed to go anywhere without having a guide or translator with him, and much of what he did see in the country was nothing but a work of propaganda aimed at spreading the cult of personality of North Korea’s glorious leader.

After I put this great graphic novel down I felt I had learned more about the terrifying country over 176 pages than I had from watching the news every day. Sure, nowadays you hear a lot about what the leader of North Korea is up to, and Western news channels love to increase viewing figures by warning of the threat North Korea poses to us. But not many shows, if any, spend any time showing us what North Korea is actually like, and to learn a little more about that was a fascinating thing. Now I’m torn between wanting to go to Pyongyang and see it for myself, and wanting to make sure I never step within a hundred meters of the place.