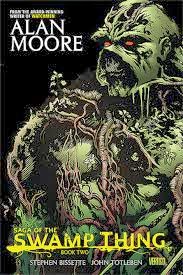 Yet another hero with a tragic backstory, Swamp Thing is the story of a scientist caught in a laboratory accident which leaves him physically altered and means he has to walk away from his former life, leaving the girl he loves behind. Sound familiar? Of course it does, and you would be forgiven for thinking the backstory of Swamp Thing sounds a bit cliché. Maybe it is.

Early issues of the Swamp Thing graphic novel ambled along, and although they were good, they were never great. But then Alan Moore got his genius hands on it, and this comic became brilliant. Saga of the Swamp thing was Moore’s first comic release in the US, and it is what started to get him attention in the graphic novel world. This is a good book to read if you want to see some of Moore’s early work before he wrote Watchmen, From Hell or any of his other classics.

As always, with Swamp Thing Moore uses the medium of the comic to look at some real life topics. It says a lot about his skill as a writer that he can explore moral and political issues whilst crafting stories about a big green swamp-dwelling monster. Moore manages to mix his messages in well with the horror-themes of the plots, and the end product was something completely original on its publication in 1982.

The real strength of this comic and the reason why you should read it if you’re a fan of Swamp Thing is that Moore really digs deep into the past of the hero and how he came to be, and in doing so he creates a mythology for the character that you can’t afford to miss. This is struggle with a loss of humanity and a struggle to find yourself, and it is a deep and emotional story.

Before Moore took over Swamp Thing, he was really a back-shelf character that had a small following but was hardly creating splashes in the water (I just realised that the meaning of this sentence could apply to both Moore and the Swamp Thing). By the time Moore was done every comic fan knew about Swamp Thing, and the world of graphic novels was changed for good. So I would say to you that despite how B-movie the name of the book sounds, you will really enjoy reading the tragic story of the man forced to live in a swamp as a beast.