Read this if you like: Weird and hilarious super heroes and Alan Moore. 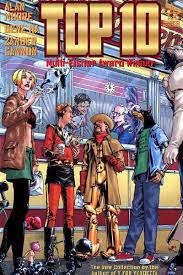 In a similar vein to Kingdom Come, Top Ten takes place in a world where superhero powers aren’t just the privilege of a unique few men and women; instead, in the City of Neopolis every single person has some sort of superpower. What separates them from each other is what their powers are, how they use them and what fashion choice they make when deciding which costume to wear (you see some heroes these days wearing a cape that is so last year.).


This is another entry in a top 100 comics list which is becoming increasingly Alan Moore-heavy, and I was well aware of this when I made the list. It might look bias to have so many works by one man in a best graphic novel countdown, but the fact is that there are few others in the history of comics to have influenced the medium so much. I could point to perhaps only Stan Lee, Will Eisner and a few others to have done as much for graphic novels as Moore.

Of course, you can see by the top 100 list that there a wide range of brilliant writers and artists out there; people like Dave McKean, Grant Morrison, Jeff Smith, Daniel Clowes, Marjane Satrapi all contribute to the greatest comics of all time. It's just that none of them can produce classics at the proflific rate of Alan Moore.

Top Ten carries a lot of traditional Moore trademarks. The story is one of action and superheroes - standard comic book fare - however there is a complexity to the characters, the problems they carry with them and the issues they have to face that elevates this well above just a standard superhero comic. That said, compared to other Alan Moore books such as From Hell and Watchmen, this is surprisingly upbeat in tone, and Moore inserts more comic relief and has more fun than he usually allows himself.

The premise in Top Ten of everyone having superhero powers allows writer Moore and artists Gene Ha and Zander Cannon boundless freedom in deciding who to populate their comic book world with. Part of the fun of reading Top Ten is seeing which combination of odd-ball character and crazy super power you will see next, usually to hilarious effect. Some examples are a telekinetic Santa Claus, a canine police sergeant with human intelligence, and a Satan worshipper with peacock feathers. It makes for great entertainment and proves Top Ten to be one of the most imaginative graphic novels ever produced.

If you are looking for something serious and mature in tone then this comic isn't for you. For something deeper, look to older entries in the list like From Hell, Safe Area Gorazde and the recently-reviewed Pyongyang: A Journey in North Korea. However, if you’re looking for a story that is hilarious, well-written and featuring some of the strangest superheroes you will ever see, give Top Ten a try.

And now that this book has been reviewed, keep checking the site because soon we will be entering the top ten of our best graphic novel list.