10 - Hellboy: Seed of Destruction by John Byrne and Mike Mignola

Read this if you like: Wise-cracking demons, gothic tales, the Witchfinder series. 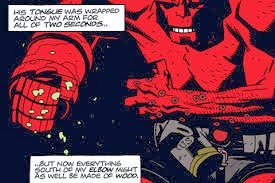 As much as I love superheroes, by now many of their origin stories have become cliché. Chalk this up to them becoming mainstream or popular, but it seems that most superheroes origins must meet one or more of the following criteria:

1) Someone close to them dies.

2) There is an accident at work, usually in a science lab.

3) The hero comes from a sprawling, technologically advanced yet socially backward and depressing city.

Some of our best heroes have these common elements in their beginnings; there’s Batman with the murder of his parents and the depressing Gotham city, and Peter Parker with the death of Uncle Ben and accidentally getting bitten by a spider. Then take poor old Bruce Banner and the experiment-gone-wrong that turned him into the Hulk and ruined his life. The further back you go in comic history, the more examples you will find.

This is why I like Hellboy’s back story. Created by Nazi black magic, Hellboy appeared on earth as a demon infant and he was snatched up by the allied powers and raised to be the world’s best paranormal detective. Yes, Nazi’s functioning as villains have become cliché themselves, but this is still a pretty original backstory. It goes against most of the superhero tropes, anyway.

It also has a ring of truth to it as well; new technology was important in World War 2, and being the first to master a particular technology would give a side a major advantage. Often if the allies or axis mastered a technology before the other it was pure luck that they did so, as it was usually a case of first through the door with the other not far behind. Such was the case with the allied finding of Hellboy, where allied forces were in the right place at the right time to discover the newly-created demon baby who would prove to be a major asset to them.

Seed of Destruction, a debut for Mike Mignola, is one of the best Hellboy stories ever put to paper, and it was also used as the basis for the first Hellboy film. The best way to describe is by saying that it is a lot of fun. When illustrating this comic Mignola has taken a lot of care to make sure the book has a lot of humour, and as script writer John Byrne’s influence can clearly be seen, especially with Hellboy's tendency to make wise-cracks that only a superhero could get away with.

When I read a graphical novel I usually look for the following things above all else:
I love a visually stunning comic, don't get me wrong. It's just that I value storytelling above everything else.With Seed of Destruction though it is Mike Magnolia’s artwork that is the clear star. As creator of the Hellboy concept, Mignola would later take over writing duties of the series and he when he did he was able to take it to a whole new level.

Mignola lives and breathes Hellboy, and I strongly suggest you read as much of the series as you can. Start with Seed of Destruction though, because for me this is the best Hellboy graphic novel ever made. The fact that it began the Hellboy series and the influence it would have on the comic book world means that it is well-worthy of a top ten place in our best graphic novel list.