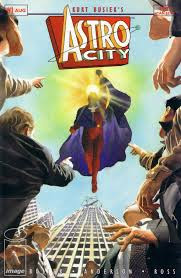 
The graphic novel is written in anthology form, meaning that the stories are short (often only one issue) and they are resolved quickly and then we may never hear from that character again. It means that as you read Astro City you get to know what the city is like from the viewpoint of all different kinds of people, from the heroes themselves right up to the everyday man.

The short-story format means that this is a graphic novel you can read in pieces, and if you only have an hour to spare you can easily read one issue and then come back to the rest later. Most comics struggle with the anthology style because it means you don’t have much time to establish a setting and a character. Astro City writer Kurt Busiek doesn’t have this problem - his writing is fantastic, and he can often set up a story and get you on the side of a character within a few panels.

With Astro City, Busiek has created a graphic novel that has taken a tired, cliché ridden genre and breathed new life into it. Going into the project he stated that he was looking to try new things with the superhero genre – explore new themes, go a little bit deeper than usual, try something new. He manages this in spades in this comic, because some of the stories look at ideas that just haven’t been paired with the superhero genre before.

If you love superhero graphic novels but you’re looking to buy something a little different then give Astro City a try. With its strong writing, fantastic artwork and innovative plots it is a great book for any graphic novel fan.