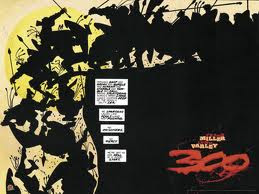 When Frank Miller began writing 300, a comic retelling of the Battle of Thermopylae, I don’t think he was particularly interested in getting people excited about history. His inspiration for the book came from a film he had watched when he was younger (The 300 Spartans), and it may have been the story of one man standing up to an entire empire that drew him to it rather than the historical significance.

It wasn’t quite one man of course; there were 300 Spartans standing up against the several thousand strong Persian army at the pass of Thermopylae, and each one stayed and fought a battle that he could probably see was hopeless. Every single Spartan soldier showed more bravery in three days by holding back the Persians attempt to conquer Greece than most of us do in a lifetime. So this is definitely not a one-man story, however there is one Spartan who shines above the rest.

This is King Leonidas, the Spartan king who refuses twice to treat with the Persians, point-blank refuses to surrender to a power many times stronger than his own, and won’t even give up when it is clear the fight will only bring death to him and his men. Leonidas is a true leader, warrior and is the strongest character in the book. He is the driving force for the Spartan Army, and he is the driving force for Frank Miller’s graphic novel.

Although 300 can take some credit for getting people interested in Ancient Greek history and has encouraged comic fans to seek out more of the world’s past and inform themselves better about what came before us, not everyone thinks it has educational merit. The stylised comic has had more than its fair share of detractors, including big names like Alan Moore and David Brin who have pointed out some of the books historical inaccuracies in the past.

Research errors aside, 300 isn’t a three-time Eisner Award winner for nothing. This is a completely unique spin on a famous battle in history, one that does manage to inform as well as entertain. And that is the whole point of the graphic novel really isn't it - to entertain. Frank Miller certainly thought so. His goal wasn’t to write a graphic novel worthy of being added to the Oxford University’s Ancient History degree course, it was to make a damn good comic that fans would love to read. He’s certainly achieved that.