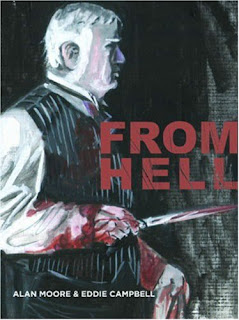 From Hell is one of those graphic novels that manages to create a genuinely chilling atmosphere. This makes it a difficult book to get through in places, but it's one that you know you can’t put down all the same. This is the scariest graphic novel on the top 100 list.

The plot of the book is a take on a semi-popular Jack the Ripper theory; one that says the Ripper killings were all part of a conspiracy to cover up the birth of an illegitimate royal baby. The perpetrator, Sir William Gull, is one of the highest figures in government, a surgeon carrying with him a lot of influence and respect.

This is what makes the story so scary; the fact that someone in such a position of authority and trust could carry out the gruesome ripper killings. This is made especially terrifying in the scenes of the actual murders, where Moore, and in particular artist Eddie Campbell, do a great job of getting across the vulnerability of the victims.

The artwork is drawn in a realistic style in black and white. It is full of darkness and shadows, and this reflects perfectly both the tone of the story and the big, black hole that is William Gull’s conscience. Although the art is effective and seems a perfect fit for the comic, it is Alan Moore’s dialogue and scripting that is the real star of From Hell.

Moore goes so deep into the motives of William Gull that he must have taken some of the ripper’s personality as his own in order to get into character when he wrote. As a reader I remember looking over Gull’s shoulder as he went about the killings and I just felt sleazy; as though I was actually allowing it to happen. On its release we had never seen anything like From Hell before, and it is an experience you will never forget.