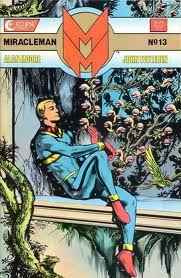 Although the character has been around since 1953 when he was created by Mick Anglo, for the purposes of his entry in the top 100 list we will be talking about Alan Moore’s Miracleman (also known as Marvelman). Anglo’s Miracleman was run of the mill in many ways, whereas when Moore took control in 1982 he re-launched a darker and more serious story. Neil Gaiman also deserves a lot of credit for his run on the series and his involvement in developing the character for a modern audience.

Miracleman is a graphic novel that has spent its life struggling through legal battles. It has changed name, changed publishers, been taken out of print for years at a time, and despite the excellent writing by Alan Moore, and later Neil Gaiman, it is a comic more famous for its problems than its plots.

Although the legal troubles of the comic have made it an important part of the comic book landscape – mostly in terms of character ownership – it is the writing of Alan Moore during his run that makes it such an influential novel.

We take it for granted these days that superhero stories will have grounding in reality. Gone are the days where a man would become a super villain by falling in a vat of chemicals; a baddie needs a credible and grim backstory that can be explained by real-world physics. Heroes need to be real people, and they need to live in the real world. We won’t accept the ridiculous storylines of the past.

In a large part we have Moore’s Watchmen to thank for that. Before Watchmen though, Moore practiced his superhero revisonism on Miracleman. This is where we first see Moore’s ideas on what a superhero story should be bleed through, and it means this comic was a catalyst to the changing of the graphic novel world. That is why Miracleman is such an important book.