#25 – Superman: Whatever Happened to the Man of Tomorrow? By Alan Moore and Curt Swan 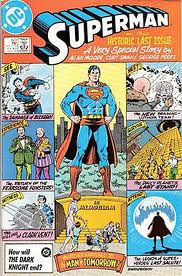 The second Superman book to appear on our list, Alan Moore and Curt Swan’s take on the popular hero is the best ever written (for my money at least). Coming in at 128 pages, this is one of the darkest and most complex editions of the Man of Steel’s adventures, but then would you expect anything less from Alan Moore?

Part of an effort by DC to simplify its multiverse for new comic book readers, the Man of Tomorrow is narrated by Lois Lane to a journalist named Tim Crane who works for Clark Kent’s old newspaper. Crane is investigating the decade long disappearance of Superman and obviously Lane’s was the first door he knocked on. The rest of the book is a flashback as she tells Crane what happened in the time leading up to the Man of Steel’s vanishing.

There is plenty of dark action in Man of Tomorrow as well as the appearance of some of the series best known characters and villains like Lex Luther, Bizarro, Toyman and Prankster. I won’t spoil anything here but there are some of the most memorable scenes in comic book history in this story, events that sent a tidal wave across the DC universe at the time of release. I'd love to be even a little more specific than this but I would hate to spoil anything for you.

As the years have come and gone it is becoming clear just how influential Moore and Swan’s Superman graphic novel is. It changed the way every single comic writer approached a Superman story as well as having a knock-on effect on the writing of other characters plots in the DC universe. This book was commissioned with the ending an era in mind; a stop to an era of multiverses, conflicting and contradictory character stories and confusing parallel worlds. Moore and Swan ended an era alright, but the work they did on The Man of Tomorrow was far from a real ending - the work they did on this book is still being felt in the graphic novel world today.