#51 - The Ultimates by Mark Millar 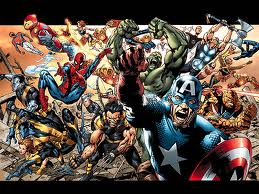 2012 was a big year for the Avengers with Joss Whedon’s live action translation becoming the third highest grossing film of all time, sitting just behind Avatar and Titanic but beating the Harry Potter film finale by a good $200m. A lot of you will have gone to see The Avengers film but maybe not all of you will have read the graphic novel that served as its inspiration.

The Ultimates by Mark Millar is this book. Whedon used it in his making of the film and if you read the comic you can see why – this is the Avengers, but it’s also original. It’s not the same characters fighting the same things in the same way, it’s darker, more cynical, and not everyone gets along.

Thor, for instance, doesn’t want to join his pals Tony Stark and Bruce Banner in the newly created Ultimates, and Captain America is only offered a place once he thaws out from his big freeze. Thankfully Nicky Fury is on great form where he solves earth’s problems safely from the chair in his S.H.I.E.L.D office.

The artwork, superbly done by Bryan Hitch, is breath taking. I don’t often devote many lines to praising artwork because I’m more of a storyline, dialogue and character guy, but The Ultimates really is something else. Hitch’s artwork on The Ultimates has earned him the reputation of being a slow artist but boy is it worth it.

You won’t find much criticism aimed at the Ultimates but some people do find volume one to be slow moving at times. Me, well I love a good build up and I think that for any series to be great you need to set the scene a little. In volume one Millar gets the pacing spot on but it’s just a shame the series isn’t longer. If you want a fresh take on old heroes, sharp dialogue and a cracking story then the Ultimates is a graphic novel you’ll love.