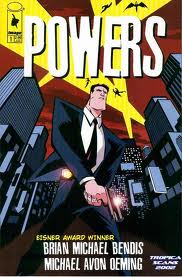 Powers is your classic police procedural story but with a twist – it’s also a superhero fantasy story. The series follows detective Christian Walker and his partner Deena Pilgrim as they solve crimes and in volume 1: Who Killed Retro Girl? they kick off the series by trying to find out who murdered popular superhero Retro Girl.

If you’ve followed my list from the beginning you’ll be familiar with Brian Michael Bendis by now. He also wrote Jinx

(#55). One of these days I’m going to start a running tally of how often each author appears in the top 100 list, because I have a feeling that Bendis will be number one at the minute.

What I’m getting at here is that Bendis is a great writer, and if you’re a fan of his other works you’ll love Powers. His books usually involve detectives, police procedure and murder, and Powers represents Bendis trying to play with his theme and have a little fun. In Powers he gives us great characterisation, a little bit of social commentary and, of course, some humour.

Beyond the superhero twist this is your usual crime story complete with all the clichés of the genre, but what brings it up to ‘great’ status is the dialogue and characterisation that Bendis brings. The script moves wonderfully back and forth between characters and makes it seem like something you would expect to see on HBO. I’m surprised that Powers hasn’t been picked up for either a film of TV series; with dialogue this good it seems destined to be filmed.

Some people don’t like the artwork, with many feeling it is reminiscent of the style on shows like animated Batman, but that’s the only criticism you’ll hear. Start at volume one: Who Killed Retro Girl?

and give Powers a chance – I promise you, it gets better and better.