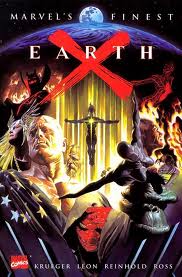 Earth X has an interesting history in that the original idea came from a magazine. Wizard magazine asked Alex Ross, creator of DC’s Kingdom Come, to imagine what the Marvel universe would look like in a dystopian future. Ross’s imaginings, in which he outlined how Marvel heroes like Captain and Hulk would cope when living in a world where ordinary people had superpowers, were so popular that the magazine issue they were in sold out, and fans demanded that Ross’s creation become reality.

The names of the characters in Earth X will be familiar to you, but that is where the familiarity stops. This is also what makes Earth X so great – it is completely different from any other Marvel superhero books. Some names you might recognise are Captain America, Hulk and Thor, but in Earth X Captain America is an ancient, broken man, Hulk is more ape than mutant and Thor is a woman. Yes, you read that right.

I don’t think Joss Whedon would ever pick up this particular branch of story for the Avengers 2 movie, but I think you should pick up the book. It has the sort of gripping story that makes you burn through the book in less than a day, and it is one of the most ambitious superhero comics you will ever read.

I don’t know about you, but I find the “What if?”-type books hit and miss, and sometimes alternate universes and storylines make things confusing. They sometimes remind me of TV sitcom episodes where the writers ran out of ideas midway through a series and thought “let’s just change one little detail and contrive an entire episode out of it”. This isn’t the case here though. Earth X

is a book that really justifies the divergence from the Marvel canon and it is absolutely essential for fans of the Marvel universe.