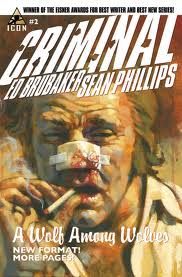 Ed Brubaker makes his second entry in the best graphic novel list with Criminal, a story about two generations of crime in Center City. The writing is classic Brubaker; gritty, realistic, grim and with a definite pulp-feel. The artwork by Sean Phillips is 100% successful in supporting the feel set up by Brubaker’s writing, and it means when you open the book and see the characters sat in a bar you can almost smell the spilt beer and the rising cigarette smoke.

This is the sort of book that hooks in the older graphic novel audience, be it people who read graphic novels as kids but want something with a more mature theme, or people who until now have always been a little dismissive of comics as a medium but with give an adult book a chance. It is a work of fiction that takes itself serious and demands that you do the same; there is nothing fluffy about Brubaker’s work.

As for the storytelling itself, each edition of Criminal

looks at a story from a different character’s point of view, meaning that Brubaker can change things and experiment with each character. It also allows him to be able to show you more of the world of Center City and tell the story in a way that otherwise might not have been possible.

I’m always on the lookout for graphic novels that are being turned into movies, even if sometimes things get lost in translation. Criminal, I feel, would be great on the big screen. With its sombre tone and dark colours it would suit a director like David Fincher perfectly, and I think a book like this deserves the kind of exposure a movie would bring.


I don’t usually do this but I’m going to end this post with a question: what are your feelings on graphic novels being turned into films? Does it annoy you that the only way some people would be interested in a graphic novel is if it was made into a film, or do you think it is a good way to win the medium new fans? Let me know in the comments below.