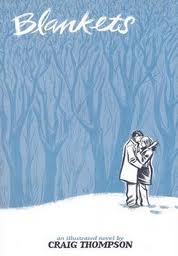 is Craig Thompson’s autobiographical tale about coming out to his religious parents as him no longer being a Christian. It is a mainstay in numerous best graphic novel lists and in 2004 it won three Harvey and two Eisner awards.

This is a deep work of fiction with long running themes of sexuality, spirituality and adolescence. With atheism being such a popular topic today Thompson’s story is bound to appeal to a lot of this generation’s youth, and many people who grew up in religious households will no doubt also feel drawn to its themes.

The art work is supreme and matches the ideas of the story perfectly, and Thompson uses literary techniques that you would normally find in top-class written novels. Subsequently, Blankets marks a time of progression for the graphic novel medium where it began to be taken more seriously by critics and readers of fiction. It is a brilliantly told story and it really has done a lot for the medium, and this is especially impressive when you consider that it was only Thompson’s second book.

The best words I could use to describe Blankets are honest and touching, and this comes from both the beautiful artwork and the moving story. It is a graphic novel that is executed so well that it has the power to transform you as a person, and for people who are struggling to forge their own identity in a household that has set ideas on how you are expected to behave, the tale that Thompson shares is a revelation.

If we were trying to put an argument together for the inclusion of graphic novels as source materials in schools then Blankets is what I’d use to make my case. It should be required reading for young people whatever their backgrounds and beliefs.