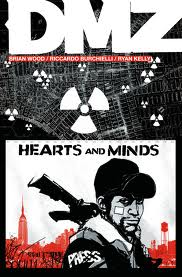 The title 'DMZ' stands for demilitarised zone and this is what has become of Manhattan during the second American Civil War in this graphic novel. This is Brian Wood’s imagined future of the USA and it is a bleak one where the US fights its own countrymen, a group banded together under the idea of being free states and who form their own government and fight for secession.

The idea of DMZ

brewed in Wood’s mind during the 9/11 attacks and this clearly shows in the themes and imagery of his work. It is also what has helped Wood’s book become so popular, because the ideas hit close to home for a lot of Americans and Wood’s decision to mirror aspects of the Iraq conflict gave the book some much needed attention in the press.

What makes DMZ such an emotional experience and a gripping story is the fact that the setting and events, no matter how far away from reality they currently sit, are scarily plausible. Given the right circumstances and the setup of a certain chain of events it’s not beyond the realms of possibility that the frightening future of DMZ could actually happen, and my experience of reading the books was that every so often I would see something happen, put the book down for a minute and think “damn”. Needless to say I hope Wood is wrong.

A word I hear a lot when I talk to people about DMZ is ‘potential’. With such a great set up there were so many ways Woods could have taken his story. He made his artistic choices and took a few gambles with the characters and plot, and even though some won’t agree I do think they paid off. DMZ is a graphic novel that is a perfect accompaniment to the times we live in.