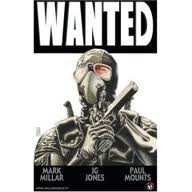 Mark Millar returns to our list with his tale about Wesley Gibson, a down-on-his-luck man who finds out he is the son of an assassin. You may already be familiar with Millar’s work; Wanted was released as a film adaptation in 2008, although the translation can only be described as loose at best. Don’t worry, I promise you that the book is much better.

The plot of Wanted is something you will have seen in lots of other films and books – the protagonist starts off as a guy who is beaten on by the entire world; his job is awful, his girlfriend is sleeping with other dudes and there is something obviously missing from his life. Here enters the inciting incident to change things, and in the case of Wanted it is when Wesley is visited by the Fox, an assassin who recruits him into his killer fraternity.

The plot setup sounds fairly standard when I write it like that, but I have to point out that Mark Millar brings his standard twist to things. In the world of Wanted all the superheroes are dead and it is the super villains that have control of the world. Consequently when Wesley joins the evil assassins we see the whole comic book from the perspective of the bad guys rather than those who would usually be trying to stop them. The way Millar presents this has brought Wanted comparisons with Alan Moore’s seminal work, with some calling it ‘Watchmen for super villains’.

If you saw the film and were non-plussed then don’t be put off by the book – I would say it was an okay movie but a fantastic novel. If you like Watchmen, The Ultimates or anything that puts a twist on a common graphic novel formula than I would recommend you give Wanted a try.