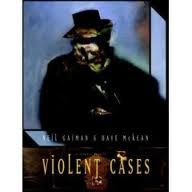 We end the forties with a graphic novel written by two giants of the comic book industry – Neil Gaiman and Dave McKean. Gaiman's CV includes The Sandman, American Gods and Coraline, whereas McKean has given us Cages (#68 in the best graphic novel list) and has done great work on Hellblazer and The Sandman. I could probably end this review right here, because you know what kind of book you will get when these two write it.

Plot-wise Violent Cases is a disturbing tale told through the memory of its narrator, a man who struggles to properly recall incidents from his childhood (including a visit to an osteopath who treated Al Capone). From here things get complicated and we travel through layers of memory so twisting that they put the narrative in Inception to shame.

The start of an award winning collaboration of Gaiman and McKean, this book is a treatise on the complexities of the mind, the fickleness of the mind, as well as being a thought-provoking discussion on the nature of our memories. In short, this book represents two men using their imaginations to full effect and in doing so, forcing us to look at our own.

The art in Violent Cases is fantastic, the script as good as you’d expect. Gaiman’s influence is slightly heavier throughout the story than McKean’s, but this was McKean’s debut so maybe this was to be expected. For fans of Gaiman, you will love this book. It is classic Gaiman but without the supernatural parts, so if you were looking for something a bit grittier from the author then this comic is for you.

Will this novel make your head hurt? Quite possibly. Should you read it regardless? Absolutely. This is a fantastic entry in the top 50 of our list.