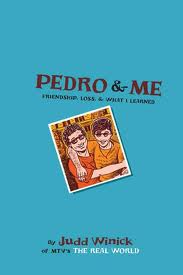 As we break into the top 40 what better way to start off than with Judd Winick’s Pedro and Me, a book that won a handful of awards when it was released in 2000. If you ever watched MTV’s The Real World: San Francisco you’ll recognise the creator of this graphic novel and his titular friend Pedro, both of whom met on the TV show, became roommates and then later became friends.


Pedro and Me is a book written straight from the heart. There’s no other way to describe, it just seems like something that was actually ripped out of the author and put on paper. It is heartfelt, it will have you crying and you will definitely read it in one sitting. This is one of those stories that you remember all your life.

The actual plot tells the story of Judd and Pedro’s friendship, and of how they met on the TV show, got to know each other, became close friends and eventually Pedro died of AIDS in 1994. This a tragic story that is told beautifully by Judd, and the depth of feeling he had for his friend comes across effortlessly in the books pages.

During his time in the Real World house Pedro tried to raise awareness about AIDS. After his friend’s death, Judd has taken on the task for himself, and through Pedro and Me he educates us on the treatment of AIDS and coping with the disease. That said, this graphic novel isn’t a lecture. It is an emotional look at a friendship that never had a chance, and it goes from light hearted to sad back to light hearted so quickly you’ll be overwhelmed with emotions. A must read.