#38 – WE3 by Frank Quitely and Grant Morrison 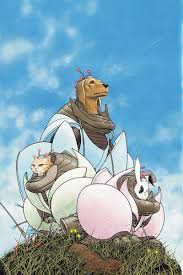 Another short entry in the best graphic novel list, Grant Morrison and Frank Quitely’s manga-inspired armoured-animal adventure WE3 was published in 2004 and the trade paperback only weighs in at 96 pages, but it terms of quality it holds its own against anything else in the list.

The plot sees Bandit, Tinker and Pirate (a dog, cat and rabbit) as they attempt to flee from a captivity where they had been used as prototype weapons. They wear special animal armoured suits, can talk a little and have their own arsenal of weapons that allows them to kick ass. Through the course of the story they have plenty of opportunity to use these weapons as trouble follows their escape to freedom.

You already know Grant Morrison if you’ve been following this list, because as well as WE3 he also wrote X-Men: E is for Extinction and The Invisibles, so if you’re already a fan of his work you will definitely like WE3. You will probably know Quitely as Morrison’s long-time graphic novel collaborator, and his presence in a Morrison comic is always reassuring.

For such a weird premise, this is a powerful book. The art is breath-taking, the imagery stunning and the writing can be emotional at times. Morrison manages to pack an awful lot into such a short issue series, and in half the pages he and Quitely accomplish more than some graphic novels three times their size. Even more impressive, ME3 doesn’t use anywhere near the amount of dialogue most books would and instead chooses to rely on the subtle gestures of the animals to get points across. This book is an instant classic and it is only the quality of the graphic novels above it that kept it from being further up in my list.