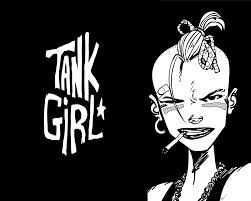 Time for something completely different. Tank girl, the British comic set in a future state Australia, is the chaotic punk offering from writers Alan Martin and Jamie Hewlett. It rates so highly in this list because of its bold originality. This is a book that dares to be different; I mean, how many other books have you read where the main character is romantically involved with a kangaroo?

It is this relationship that makes the main character, Tank Girl (named so because she lives in a tank, but her real name is Rebecca Buck) an outlaw in her world and thus alienates her from a society that is anarchic itself. Throughout the book authors Martin and Hewlett use the storylines and characters to deliver their own political messages, often rallying against authority.

Although the comic built up a cult following and was a part of indie counter-culture, the novel is rapidly making headlines into mainstream graphic novel appeal, garnering much critical acclaim since its first publication in 1988. Back then it was just a small strip in a new magazine called Deadline, but now Tank Girl has great success in comic book markets in Europe and Asia. There has even been a film; in 1995 Lori Petty, Ice-T and Naomi Watts starred in a sub-par movie translation of Martin and Hewlett’s work.

The thing that usually draws fans to Tank Girl is just how cool the whole thing is. The setting, the main character, the mutated kangaroo, the whole book just bleeds hipness. And if you’re still not convinced there’s enough cool in this book for you, how about this? The artist Jamie Hewlett is the guy responsible for the artwork on the band Gorillaz!