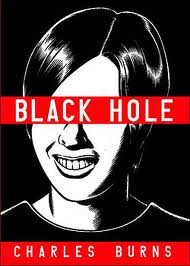 Black Hole is Charles Burns’s twisted story of teenagers, sexuality and alienation. Set in 1970s Seattle, the book follows four main characters as they come into contact with a sexually transmitted disease. This is no ordinary STD though; this disease actually forces it’s sufferers to develop physical mutations on their body, thus making it obvious to other people who is infected and who isn’t. The physical manifestation of the disease is what alienates it’s suffers, although this isn’t the only form of isolation present in the book.

Black Hole is an outstanding piece of fiction and a lot of Burns’s themes will hit close to home for most readers. After all, who didn’t feel isolated in some way during their teenage years? It is Burns's ability to get this across that makes this one of the best graphic novels ever written, and also makes it unsurprising that the book has garnered numerous Harvey awards since its release.

The dark imagery and grimy themes of Black Hole are probably what we’d get if Se7en and Fight Club director David Fincher decided to create a graphic novel. All the more fitting then that the director was trying to get a movie together, although things have slowed down lately. I personally think a television series would be better suited for Black Hole, but some of the plot and themes might be too much even for HBO.

Black Hole is an inventive, shocking story about sex, drugs and STDs, and it comes from the writer of Ghostworld, another of the best comic books ever written. I can’t think of one reason why you shouldn’t go and read this book right now. Go on, I’ll wait, and then we’ll move on to number 35.