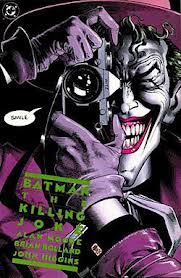 Next on our list is a book written by one the legends of the graphic novel world and starring one of the greatest comic book characters ever made. The Killing Joke, a one-issue, 64 page story, is one of the most popular episodes of the batman series and one that was a heavy influence of the box office-busting Christopher Nolan films.

Obviously, given that this is a Batman story the Joker plays an important part. The plot centres on his attempts to drive Commissioner Gordon mad by trapping him in a desolate amusement park and by shooting his daughter Barbara. Running parallel to this is a background story for the Joker which tells us more about the villain’s past and how he came to be the way he is. It is fascinating stuff and it is a story only someone like Alan Moore could do justice.

As with any Alan Moore book the plot is just there for him to hang his themes on, and in The Killing Joke he delves deep into the character of Batman and explores the idea that the Dark Knight is just as crazy as the villains he locks up in Arkham Asylum. If you want superhero fiction but you want it to be deep, this book is where you should start, because Alan Moore and artist Brian Bolland elevate the Bat to the heights of any literary fiction you could read.

The Killing Joke has fantastic art, it is thought provoking, and the script is packed with emotion and humanity. For its lasting influence on superhero graphic novels, the DC universe and graphic novels in general this book is worthy of its place amongst the best graphic novels.