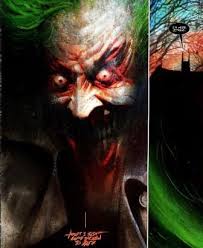 When Grant Morrison sat down to write Arkham Asylum there was a trend in the comic book and movie world where superheroes were given a realistic makeover. This meant they were given credible backstories, less extravagant costumes and more often than not were very grim and depressed individuals.

Grant wanted his 1989 Batman book to be “more like a piece of music or an experimental film than a typical adventure comic book.” This ambition was shared by artist, and long-time Morrison collaborator, Dave McKean, and his illustration throughout the book highlights the more out-there qualities that Morrison wanted in his script.

If you own a PlayStation 3 or an Xbox you’ll be somewhat aware of the plot of Batman: Arkham Asylum due to the 2009 game made by Rocksteady Studios, probably the first game to really do the character justice. The story sees Batman trapped in an Arkham Asylum that is now under the rule of an unhinged Joker, and Batman needs to both rescue the staff of the facility and find a way to escape it himself. Popular Batman villains such as Killer Croc and Mad Hatter make an appearance and do their best to hinder our hero.

I know that Christopher Nolan’s films have pinned down the whole ‘Dark Knight’ thing and made the character a grim and sombre entity, but Grant Morrison’s graphic novel is where it started. This is one of the darkest Batman comics ever written, and after reading it you’ll probably agree with me that it is one of the best. If you’re a fan of Batman and you still haven’t read this book to do, then you need to beg, borrow or buy it straight away.