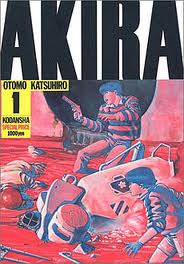 One of the first Japanese manga graphic novels to be translated into the English language, Akira is probably best known for the 1989 anime film but the graphic novel is where it gets its setting, story and characters from and this is where you should start.

Akira is set in a dark WWIII future, more specifically in a cyberpunk city called Neo-Tokyo. The book is full of violent action, gang warfare and anti-establishment struggle. In its pages we follow Kaneda and Ryu as they are sucked into a fight that just might be too big for them.

Critically, Akira is one of the most acclaimed manga works ever printed, winning numerous awards and building an army of fans from around the world. It is also an important and notable graphic novel for the influence it has exerted on the industry – Akira was the first comic to really bring manga to western graphic novel readers. If you’re a fan of manga then you probably know that the comics you read owe a huge debt to Akira for its pioneering efforts.

Earlier I mentioned the Akira film, which many people may be more aware of than the graphic novel. I highly recommend seeing it because it is an artful example of how to make a good comic adaptation, but I do think the book is a lot better. Firstly, the film inevitably has to cut parts of the story out to fit in the essential plot points. This is the case in all adaptations, and it is understandable, but why miss out on things when you can get everything in the graphic novel? Secondly, the telling of the story is completely different, and the comic format does it better. I won’t go into detail because I want to avoid spoilers, but by all means see the film, read the book and let me know which you prefer.

Akira is essential manga reading and one of the greatest graphic novels.