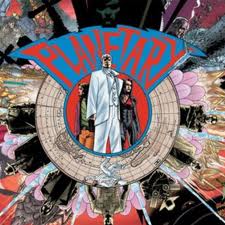 This is Warren Ellis’s third entry in our countdown, making him one of the most prolific and successful authors on the list. It is also his best work. Planetary, which ran for twenty seven issues from 1998-2009, is an attempt to delve into and explore the superhero genre by a master comic book writer. If you were to look at the genre share of the graphic novel market and see which sold the most, superhero books would undoubtedly come out on top. This makes Ellis’s exploration of it an ambitious and important task.


The plot of Planetary concerns the ‘Archaeologists of the Impossible’ (as they dub themselves), a group dedicated to discovering the secret history and mysteries of the world. The team is made of three heroes and they explore the planet to see what secrets are hidden in its cracks. Throughout the 27 issues they find things like super humans, aliens and fantastical beasts, many of them clearly modeled on existing fictional creatures.

Planetary is massively acclaimed by fans and critics alike, bagging four Eisner award nominations during its run. It is the pinnacle of Ellis’s comic C.V, and you would be hard pressed to find better artwork than what is on offer here by John Cassaday. People have compared Planetary to all sorts of things from the episodic X-Files and Alan Moore’s classic Watchmen, but ultimately this is an original work both in idea and execution.

At first glance the X-Files comparison is legit; each issue of Planetary sees them discovering something new then moving on, as though the series were episodic. As time goes by and the story progresses you begin to realise that each episode actually links in to an overall story. As for the Watchmen comparison, well I’ll let you make up your own mind there. But it might help you to know that Alan Moore has given Planetary his seal of approval by writing an introduction for volume one. If he likes it, who are we to argue?