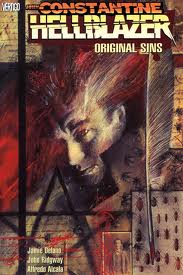 John Constantine might have been born in the murky depths of Alan Moore's The Saga of the Swamp Thing, but Original Sins is where he really came to life. If you’ve read Swamp Thing then you will know that John was originally created as a recurring support character to serve the story. He quickly became so popular that Jamie Delano, a British writer who has also worked on Night Raven and Doctor Who, was commissioned to come up with the story for the character's first solo outing.


I have already written about Hellblazer way back at number 78 in the best graphic novel list when I reviewed Hellblazer: Hard Times. As with any A-list comic character it is always going to provoke a reaction when you try to pick their best book, but for me Original Sins tops them all. It is where Constantine was given his roots, where his personality was made, and if it wasn’t for the success of Original Sins, then he might not be around today.

Constantine is a conflicted and dividing character. He fights for the good of human kind, ultimately, and his enemies come in the form of evil entities that are bent on causing us poor humans to suffer. It is not the motive for John’s fight that so splits opinion on him though; more the way in which he chooses to fight those battles. He is a single minded and ruthless warrior; a man who is not above feeding his own friends to the wolves if he thinks it is for the greater good. If he believed it would save the human race he would feed his best friend to the devil.

Delano makes that clear right out of the bat in Original Sins, though I won’t say more than that for fear of spoiling things for you. What I can say about this comic is that although some people think Hellblazer has a “monster of the week” theme, Original Sins completely debunks that theory. There are plots, sure, and they are horrifying and page turning plots, but this isn't a plot-focused book and they aren't what makes it great.

What makes Original Sins one of the best comics ever written is how Delano uses it to explore the deepest, dirtiest depths of Constantine’s soul. He shows why the man is as full of guilt and anger as he is, and in doing so he examines themes of how doing the right thing can be wrong and whether one person’s life is less valuable when put against a billion others.

This is a thoroughly British comic (Constantine’s slang is so English that he only just stops short of saying “Cor blimey, guvnah), thoroughly scary and thoroughly thrilling graphic novel. I encourage you to read it. As you turn each page you will watch your bedroom for shadows, and at the same time you will feel a shadow grow inside yourself as you come to realise that you are coming to love this character that is capable of doing the most ruthless things.