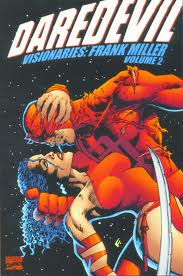 Suffering from a string of soft plot choices, cardboard characters and limp villains, Daredevil was a C-league comic book that looked all but ready for cancellation. That is until a then-unknown artist called Frank Miller was given the artistic  reins. Not much was expected of him, but Miller, and volume one writer Roger McKenzie, managed to take Daredevil and make him something special, and together they turned the character into one of Marvel's heavyweights.

Although full of crossovers and a multitude of villains, volume one is particularly good when the Hulk makes an appearance. Here we see parallels between Matt Murdock and Bruce Banner; both live with a disability, but one handles it better than the other. You can't help but feel sorry for Bruce when he wishes that he could cope with his split personality as well as Murdock copes with his loss of sight, and it is times like this that McKenzie's volume one writing stands out.

The writing got significantly better in volume two though when Miller took on scripting as well as art duties. Volume 2 saw the introduction of Elektra, Miller’s creation and one of the best Daredevil characters to see print. Two highlights are Daredevil’s fight with Kingpin and the clash of Bullseye and Elektra, an event that must rank as one of the most memorable in any comic book. It is fair to say that in volume two of Daredevil Visionaries Frank Miller made graphic novel history.

Daredevil Visionaries made the character a grade-A comic book star, it opened paths for Miller’s career that would lead him to great places, and the art style and writing shocked the comic book world into change. It is an influential work and a magnificent example of Miller’s mastery of style. Whether you’re already a Daredevil fan or not this is a book you should read. It represents a period of change in the graphic novel world, and if all you've read is modern superhero stuff then it will interesting for you to read a comic that helped shape what we have today.