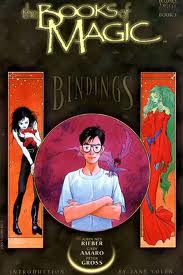 We’ve seen lots of stories about young boys who have the potential in them to become powerful magicians. It’s a plot that appeals to the masses; just think of Harry Potter, Merlin and even the first few episodes of Star Wars. The Books of Magic by Neil Gaiman follows this theme, but it does it in a way that you have never seen before.

The first thing that stands out in the book is John Bolton, Scott Hampton, Charles Vess and Paul Johnson's magnificent artwork. It is painted in a realistic style but portrays images of mystery and horror, and it is equally at home with zooming in to a close up of a characters facial expression to then zooming out to reveal a picture of the whole universe. There are shadows and demons, stars and suns. You can't read The Books of Magic without looking over each panel several times in wonder.

This is the story of a young boy’s journey into the world of magic, and he's guided by four dark mentors - John Constantine, Dr. Occult, Mister E, and another who doesn't take a name. They walk an overwhelmed Timothy on a path through the world of the occult starting at the dawn of time and leading him through the history of the universe, stopping off at places like ancient Egypt and medieval England all the way up to the modern day. It is a journey of amazement, terror and wonder, and it is no surprise that at points Timothy feels like he wants to throw up. When faced with the mysteries that Neil Gaiman and co show us, I think we'd all be feeling the same way.

This book is an exploration and explanation of everything occult that has ever happened in the DC universe. There are so many characters that make an appearance, both well-known and bit-part, that it reads almost like a visual Wikipedia of the occult side of DC’s titles. If you have a sense of wonder and are fascinated with magic, then you will find this book to be an amazing experience. Even if magic leaves you dry and you believe yourself to be firmly grounded in reality, the beautiful artwork and classic Neil Gaiman script on offer in The Books of Magic will still have you hooked.