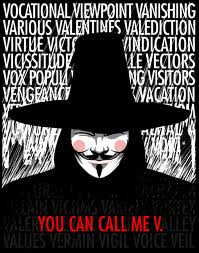 Next up is Alan Moore’s anarchist story about one man's fight against a totalitarian government. V for Vendetta was released fifty three years after George Orwell’s 1984 and even though it borrows heavily from the novelist’s work, it still handled a subject that hadn’t been seen yet in the graphic novel world.

The story is about V, a masked anarchist committed to destroying the government, and Evey, a sixteen year old girl who has her own reasons to hate the regime but doesn’t have a way of fighting back until she meets V. Told from multiple perspectives, which includes scenes that give us access to the workings of the top-tier government figures, this is a story of how bad things could get with the right chain of events and a lax attitude from the British public.

The dictatorship that hangs over Moore’s Britain in V for Vendetta is one that he imagined could come to pass due to the circumstances of the time. There was a conservative government in the UK when he wrote the book, and he imagined them being voted out. The incoming labour government would then disarm our nuclear weapons so that when WW3 hit, which would be a nuclear conflict, we wouldn’t suffer a direct hit. We wouldn’t escape unscathed though, because the radiation and instability of the world economy would put us in a time of crisis. From here, like in Germany in the 30’s, a fascist party would rise and offer to guide Britain out of the darkness.

In the book, all the fascist party do is replace one darkness with another. The art work in V, by David Lloyd of Hellblazer and Night Raven, is black and gloomy; it’s full off shadows and faces drained of colour, streets covered in grief and despair. The lack of colour is contrasted only by V and his Guy Fawkes mask. In every scene that V appears in his mask is set as a bright white, and this is to show that V is the light that will guide the country out of the dark times it is in.

The Guy Fawkes mask used by V now plays a large part in modern day culture, with the internet hacktivist group making it their symbol, as does the novel itself, which has had a great influence on how graphic novel are written. Moore’s complex themes, deep characters and real dialogue are something every comic writer should aspire to.