#54 - The Invisibles by Grant Morrison 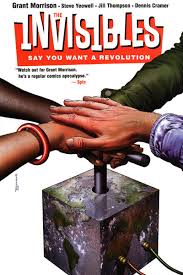 , Scottish author Grant Morrison's dystopian story of conspiracy and a fight against oppression. It's not just the content that raises an eyebrow either. The Invisibles made its creator seriously ill, the story was told to him by aliens when they abducted him, and the book was saved from being canned when its author suggested a fan wankathon might improve sales.

The content is pretty wild too though. Morrison gives us a grim future for his setting, where thoughts are censored and rebellious youths are quietened by a judicial system that takes its cue from a Clockwork Orange. It has possibly-paedophilic gang rapes and numerous lines were censored out from the main script when lawyers warned Grant Morrison he'd gone too far. The Invisibles is a graphic novel that sets out to shock the reader into serious thought, and the violent scenes and cutting script are Morrison's main tools in getting his points across.

There is a fascinating story here though, and Morrison’s imagination makes this bleak future society stand out from the other thousands of bleak futures that authors love to set their stories in. None of his characters conform to type, with wild and original personalities filling the book that range from a scouse hooligan who could be Buddha to a former horror writer turned resistance cell leader. The Marquis de Sade even makes an unlikely appearance.


Some readers think that volume one suffers from should-have-stopped-a-hundred-pages-earlier syndrome and others have found the time travel plot strands hard to follow, but despite its faults The Invisibles is still an original and engrossing read. I admit that volume one can be slow in parts, where Morrison makes great story set-ups that don’t fully work in execution. Stick with it though. The Invisibles gets better with each volume and becomes something great, and if I sound like I’m being harsh on volume one it is only because I wish it lived up to the rest of the series.

If you love George Orwell’s 1984 and Anthony Burgess’s A Clockwork Orange, The Invisibles is for you.

If you’re a fan of Grant Morrison’s work on X-Men and Doom Patrol then you’re going to want to read The Invisibles.

If you’re a bit of a twisted individual then you’ll love The Invisibles.