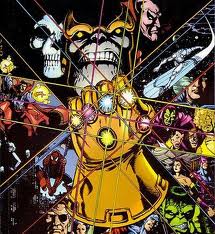 What if half the population of the world just disappeared? If it was my boss, my neighbour who always puts stuff in my rubbish bin or Brit-pop group One Direction I’d be happy. If it were my fiancé or my grandma I might not be so pleased about it. In that case I’d be looking for the heroes of earth to get their act together, find out what happened and kick some ass.

The shortest graphic novel in the top 100 list, Infinity Gauntlet is a 6 part story of Thanos’s annihilation of the half the living creatures in the universe in an effort to impress death, who is portrayed by artists George Perez and Ron Lim as an attractive, hooded maiden. Thanos, turned into a super being by the Infinity Gauntlet (six gems stuck on a glove), decides to wipe out fifty per cent of the livings things on earth supposedly to equalise a cosmic imbalance where more things are living than have ever died.

Infinity Gauntlet is improved if you do some pre-reading, with Jim Starlin’s story being born from events in Silver Surfer volume three. This isn’t a requirement though because the story is great just read on its own, and character-wise you’re going to have a ball with this comic. It has some of the best and most-loved Marvel characters in its six volumes, from Spidey to Captain America, but Thanos is the real stand-out here. It looks pretty likely he’ll be in the next Avengers movie too.

The artwork in Infinity Gauntlet is good and does a job, but it’s not brilliant. If it appears to you to change halfway through, that’s because it did – George Perez left the project before finishing all the volumes and Ron Lim took over his duties. Jim Starlin’s writing is a constant though, and it is his signature plot holds the book together.

Infinity Gauntlet is a must read for any Marvel or superhero fan who isn’t interested in reading about the grim reality of life and instead wants a fantastic story or truly epic proportions. I really mean epic too; Infinity Gauntlet will take you to the outer edge of the galaxy and back again, and at the end you’ll think six issues wasn’t enough.