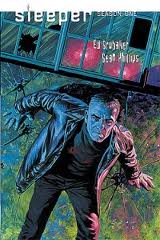 Sleeper is in a minority in this list in that it isn’t about good guy super heroes fighting against moustache-twistingly evil bad guys. Instead Sleeper’s story focuses on the other side of the fight, following covert agent Holden Carver’s part in a criminal organisation led by Tao, a villain borrowed from Alan Moore’s work on WildC.A.Ts. Technically, Carver is actually a good guy tasked by a mentor he hates to work undercover in the villainous outfit, so it isn’t quite as different from the other books in the list as I led you to believe in my opening sentence. That was to draw you in and get you interested, and I’m sorry for using the cheap copywriter’s tactic.

On the other hand, given that Carver is working undercover in a nefarious mercenary company it is natural that he runs with a lot of bad people, and some of them even become his friends. This means we get to see another dimension to the kind of bad guys that many graphic novels are content to leave as two-dimensional characters. Take Genocide, for example. With a name like that he sounds like the kind of puppet Spiderman would be tasked with taking out inside two panels of a page. In Sleeper he is given thoughts and wants, and he isn’t all bad. I won’t ruin it for you, but some of the other agent's evil tastes run too black even for him and he decides to do something about it.

It is a credit to Ed Brubaker’s writing that he can take ideas that would be clichés in most superhero graphic novels and make them different. Along with multi-faceted characters he also adds a grim realism to the word, with its neon colours and sordid violence making it seem more like William Gibson’s Neuromancer than Stan Lee’s Captain America. A lot of the credit for this must also go to artist Sean Phillips, whose portfolio includes work for WildC.A.T.s and Hellblazer.

If you read Sleeper it will remind you of all kinds of fiction, from Blade Runner and Chinatown to Neuromancer and The Invisibles. If you’re a fan of superhero books but don’t like the flashy suits, you’ll love this. If you like watching the hardboiled detectives of The Maltese Falcon and The Big Sleep, you’ll find something to like in this comic. And if you like Ed Brubaker's work on Batman and The Authority, you won't want to put Sleeper down.