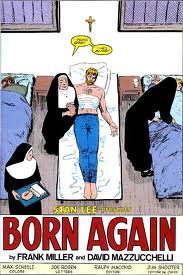 How many Frank Miller written graphic novels have made the list so far? Four or five by my reckoning, and we're only at number 57. There are going to be loads more too, I can promise you that. The man is simply one of the best comic writers ever to have sat at a desk and typed a script. This entry is Frank Miller's treatment of Daredevil.

Hit by a radioactive spill from an oncoming vehicle, Matt Murdoch is unfortunately left without his vision but it isn't all bad, because the sliders of his other senses are pushed all the way up to eleven. Dressed first in a yellow superhero suit and later in red, he devotes his time between practising law and getting revenge for the murder of his father, boxer Jack Murdock.


Daredevil has always been on the opposite side of family friendly, with issues like gangland murder and disability a stock plot point for the writers of the comic. In Born Again though Miller takes things a thousand miles further, making the mobster death and bloody revenge of other Daredevil stories seem like a walk through Neverland with Tinkerbell.

The story isn’t what you’d expect from Daredevil but it is what you’d expect from Miller, so if you’re a Daredevil or Frank Miller fan and haven’t read it yet you know what you need to do. This is also a great starting point for any prospective Daredevil reader, though as a spoiler I will say that Daredevil appears again on the top 100 list so give it a couple of weeks before you decide what to buy.