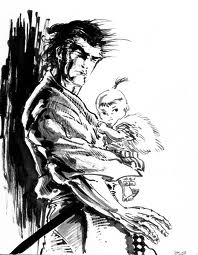 Lone Wolf and Cub is about the travels of master samurai Ogami Itto, the former Shogun’s executioner who is forced to take up the life of an assassin after he loses his position and honour through the false accusations of his enemies. Travelling across Japan, Ogami takes on various assassination jobs that come his way, his only condition for taking a job being complete honesty from his employers. That's something we could all benefit from. Ogami doesn’t take his violent assassination and revenge journey alone though; he has his three-year old son with him every part of the way.

There is a long running story of revenge throughout the 28 eight volumes of Lone Wolf and Cub, but a lot of the comic issues use an episodic plot formula, showing the various jobs and encounters our hero and his cub have. A lot of the stories end with a clever twist and we see that Ogami has brains to go with his skill with a sword. If you’ve ever read Sun Tzu’s The Art of War you will appreciate how some of these stories turn out.

The comic ran from 1970 to 1976, enjoying wide success and eventually even being turned into seven feature films starring Tomisaburo Wakayama. It has been celebrated for its story originality, treatment of Japanese culture and stunning artwork. Some of the panels on display are different from anything you will have ever seen before – how many comics do you know that feature a 127 panel fight scene?

If you want to be entertained, learn something about Asian culture and become wise in the art of war you should read Lone Wolf and Cub. Then, if you ever find yourself taking on a contract to kill someone you’ll at least have some knowledge on how to go about it with the skill and dignity of a samurai.