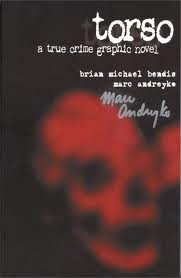 Torso is a detective story that will depress you with its grim view of the world, but at the same time it won't let you put the book down until you've finished it, not even to take a coffee break. This is Michael Bendis's second entry into our top 100 list and many think it is his greatest graphic novel work.

The story sees Elliot Ness, the character Kevin Costner played in the film The Untouchables, moving to Cleveland to straighten out a corrupt police department. If you’ve watched The Untouchables you’ll know that Ness did something similar in Chicago where he fought a war against the gangster Al Capone and also dirty cops within his own police force.

Within the story there are a few characters that Bendis spends some time developing, including Ness and his obsession with his job and the effect it has on his personal life and the touching relationship between two detectives, seemingly the only clean detectives in the entire Cleveland police force.

The art work is exactly what you’d expect from a Bendis book – well-drawn, dark and incorporating actual photos into the work. He also plays around with panel placement to mixed effect, with one section needing you to rotate the book to see what is going on. It’s an interesting device but I get the feeling some people will hate it.

That is really the only bad thing I could ever say about this comic, and it is a really small thing at that. Torso is one of the best-written graphic novels ever, with deep, ever-changing characters, and storyline that grabs you and an accurate and interesting look at a fascinating period in America’s history.

If you like detective stories, Michael Bendis, Jinx or the mystery genre then Torso is essential reading for you.