#59 - X-Men: E is for Extinction by Grant Morrison 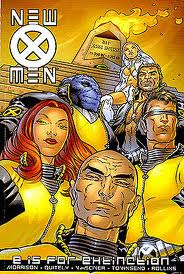 So far we’ve had X-Force and Wolverine outings in our top 100 list, respectively a spin-off and a solo outing based on one of the most popular comic franchises ever. What we haven’t had yet is an entry for the X-Men themselves. Well here it is – number 59 is E is for Extinction.

This book came in at numbers 114-116 in the New X-Men run, the start of Grant Morrison’s spell on the massively popular mutant saga. Morrison, who has taken the stage for other franchises like Batman, Fantastic Four and The Invisibles, used his time on X-Men to completely revamp the heroes.

His revamp saw a new team being put together, with Wolverine, Professor Xavier, Cyclops, Jean Grey, Emma Frost and The Beast making up the roster. Morrison crafted a deep plot that rendered the characters as more than just two-dimensional, lycra-bound superheroes, instead adding a few inches to the depth of their characters. To this effect, Frank Quietly’s artwork is a perfect complement.

The plot of E is for Extinction is classic Morrison, with each 22 page issue having more original ideas in them than most novels manage in 500 pages. The events of this book don’t stop with Morrison’s issues though; like the theoretical butterfly that flapped its wings and caused a hurricane on the other side of the world, the story of E is for Extinction still has a bearing on the issues of X-Men that are running today.

The X-Men graphic novels are an easy sell for graphic novel publishers because almost everyone has either heard of the comics or seen the movies. If you haven’t gotten around to reading the adventures of Wolverine, Xavier and gang yet then E is for Extinction is a brilliant landing place.