#58 - Fantastic Four: The Trial of Galactus by John Byrne 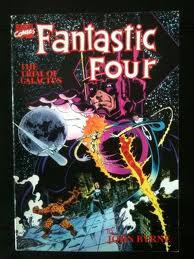 The Fantastic Four won’t need much of an introduction here. For over fifty years they’ve been one of the most famous and loved superhero teams, running on a par with heavyweights the Avengers and the Justice League. The Four offer something different to most super hero squads though; rather than being just a rag tag band of mercenaries, their shared experience that gave them their powers as well as a collective isolation from ‘normal’ people made them more akin to a tight family unit than a roving band of heroes.

Plot-wise, this graphic novel is one of the best Fantastic Four tales out there. The story isn’t about Galactus being on trial. Can you even convict a super-entity of something? I’m not sure. It is actually about the trial of Reed Richards, the man who saved Galactus from destruction and consequently led to the death of multiple other planets as well as all the living things on them.

In writing The Trial of Galactus, Byrne delivers the best Galactus plotline and also chucks in a great Dr. Doom story as a bonus. The writing moves quickly and delivers an emotional punch in places, and it stands as one of the great examples of 1980s graphic novel story writing, even if it isn’t the best that John Byrne has ever written. The trial of Richards gives you something to think about and it does raise the moral question of whether what he did was wrong. Byrne has his ideas, but it is down to you to read the comic and decide for yourself.