#67 -The Authority by Warren Ellis 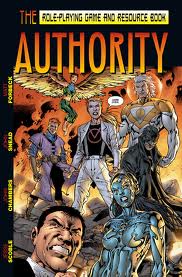 The Authority by Warren Ellis was a trend setter and pre-dated today’s superhero fiction. Films like the Dark Knight series have explored the morality involved in living life as a superhero – the greater good, violence, vigilantism etc – but years before them a comic called The Authority was already doing it. Of course, Watchmen by Alan Moore was doing it even earlier, but The Authority was still ahead of its time.

Published in 2000 under the Wildstorm label, this series has 98 issues to its name at present and has gone through five volumes. Let’s take a look at why this is one of the best graphic novels ever made and why it makes our top 100 list.

Created by Warren Ellis and Brian Hitch, the book follows a team of superheroes who will do whatever they think is necessary to bring about a greater good. Sometimes this means them taking lethal measures that seem morally wrong to some readers, but that just means that this comic accurately reflects the fact our world is grey (not fifty shades) rather than black or white.

Some criticisms of The Authority graphic novel are a lack of depth, slow characterisation, poor character motivation and a bit of moral depravity. I found it to have a good depth to it, rich enough to make you believe in Sparks, Apollo, The Doctor and crew but also quick to move on and keep you interested. The progression of Jenny Sparks, the leader of the superhero team, is one of the best character arcs I’ve seen in a comic.

This graphic novel is best for people with a love for superhero and sci-fi graphic novels and cinema. If you like Watchmen, X-Force or the Avengers then you’ll love The Authority by Warren Ellis. You'll also think this is a top work of fiction if you're read anything else by Warren Ellis. He wrote other great titles like Transmetropolitan and Planetary, and if you've read them then you have to read this.