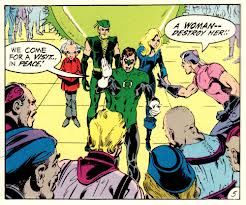 Everyone knows the Green Lantern movie sucked but you have to agree that the graphic novels are great. They're the reason why he is such an iconic comic book character, and anyone introduced to him by just watching the film does themselves a disservice if they don't reads the books. And what's the only thing better than a green lantern book? One that has Green Arrow in it as well.

I've already covered Green Arrow when he appeared at #88 in our list so you should be familiar with him already. If not then don't worry because he's not too complicated a man, he's basically a remodelled Robin Hood but a lot better. Green Lantern is trickier. He is a superhero who has the power to make whatever he wants out of the physical world, a gift made possible by a ring. There are many green lanterns in the world but you'll have to read the books to find out where they're from and what powers they each have. Later on I'll make a post on the best Green Lantern books but now's not the time.

is a series put together by Dennis O'Neil in the seventies, and it was remarkable for the way it addressed real life world issues, some of which are still problems we face today but a lot admittedly outdated. At the time though it was cutting edge, and this was what made it one of the best graphic novels in its day. It is also what has hamstrung it slightly in recent times.

This is because a lot of the problems presented in the comics ages only work well within the historical context in which they were put on paper. A criticism often leveled at O'Neill's book is that it dealt with issues such as poverty and race in a heavy-handed and naive manner, and the way it did so has meant that the graphic novel has outdated itself.

It has to be remembered though that this collection of Green Lantern/Green Arrow volumes has been reprinted so many times that its name is whispered in terror by trees in the Amazon rain forest. It's a great read and full of good ideas, and if you're a graphic novel student looking to see how the great graphic novels were made in the seventies there aren't many better examples that this.