#68 - Cages by Dave McKean: The most thought-provoking thing you'll read 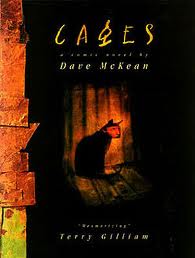 Cages by Dave McKean is one of the most thought provoking comics ever written. If you've read the Sandman books which will appear later in the list, though I won't tell you where just yet, you'll be familiar with the work of illustrator Dave McKean. He rightfully got a lot of praise for his work on Neil Gaiman's graphic novel, but the book Cages is his real masterpiece.

The story is about an artist named Leo who is stuck in a rut and desperately needs something in his life to change. We've all been there, right?

Through a crazy cast of characters, such as a landlady obsessed with birds and a hermit writer, this comic delves deep into the effect of creativity on life and the mind. Cages is low on plot but through the roof on ideas. It's best feature is a deep introspection into the mind of an artist, or anyone who employs creativity to create something.


Cages Will Expand Your Mind

is a complex comic that has more layers than a block of sedimentary rock (market research suggests I need to appeal more to geologists), and it is a piece of work that will actually raise questions in your head that you will come back to months and years after reading the book. In short, it is a shining example of what the top graphic novel writers like Dave McKean can do with the medium. This really is introspective writing at its best.

The book is 500 pages long so you're going to need a wet weekend to sit and burn through this graphic novel. It isn't the sort of thing you can pick up and drop during bathroom breaks, so I would save it for times when you're going to be stuck on public transport for an extended period of time. Next time your family makes the four hour drive to grandmas house take this graphic novel along with you.

After your done with this work I recommend you pick up some of the Sandman comics to see more of this writer's work, albeit as an illustrator. Sandman will be making an appearance higher up in the top 100 list so I won't say anything else about it now.