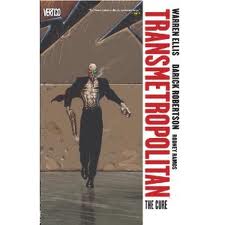 Wow, this is a first for the top 100 list because Transmetropolitan's #66 entry marks the first time a graphic novel author has made two consecutive appearances. You will have read that Warren Ellis's The Authority was #67 and now he's back with a gonzo journalism, Hunter S Thompson-inspired tale.

Transmetropolitan charts the battle famous journalist Spider Jerusalem fights against corruption in a thoroughly dystopian United States of America. The comic is set in a murky place called the City, a haven for sex, drugs and violence. Not much different from Las Vegas then.

With a series spanning 60 issues and running from 1997 -2002, Ellis adds to his impressive graphic novel CV that already contained classics like The Authority and Planetary and cements his legend as one of the best graphic novel writers in the business.

The artwork is top notch and full of the detail that you would expect from Darrick Robertson, a man who has put his talent to use in other comics like Punisher and Wolverine. It is the kind of artwork that adds hours onto your reading time because you don't dare leave a panel until you’ve uncovered every layered detail he has left there. The artwork alone makes this one of the best graphic novels ever.

Warren Ellis has written Transmetropolitan with a clever wit, a lot of violence, a dose of humour and a whole load of chain smoking. You have probably already been told a hundred times that you need to the read the book, and I'm going to echo this by telling you it's one of the best graphic novels out there.

If you like gonzo journalists like Hunter S Thompson and Tom Wolfe, and you like works of fiction such as Neuromancer and Blade Runner, then you're going to love this comic. It is an important work that gives us a view of the future that I'm worried just might come true.

"Journalism is just a gun. It's only got one bullet in it, but if you aim right, that's all you need. Aim it right, and you can blow a kneecap off the world..."