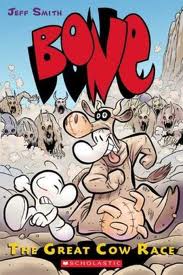 This is one of the most overlooked graphic novel series of all time in the awesomeness to popularity ratio. Jeff Smith's Bone Series

has always been a darling of the critics but it has never found popularity among comic fans in the same way other books have, and it's a shame. I hope if you read my top 100 list but haven't read Bone then you'll give it a chance.

First self-published by Smith in 1996, Bone is essentially a fairy tale about the bone cousins and friends they meet during the adventure they have to take on when they are chased out of their home town of Boneville. This book, The Great Cow Race, is centred around Phoney Bone's attempts to con the village inhabitants by running a shady betting shop. The plot is pretty reliant on cows racing as you'd probably expect.

It's ways best to start at the beginning of a comic series but for the best graphic novel list I've chosen The Great Cow Race as Bone's entry. It has the perfect mix of a fast moving and pull-you-in plot whilst giving us great characters and keeping the jokes coming. Jeff Smith has always been a master at spinning a joke and getting the most of it but it is here he shows it most.

The illustration is so great that even the gestures of Fone Bone and pals will have you laughing, never mind the actual jokes themselves. The only criticism to be bad of The Great Cow Race is that it is joke heavy but a little lighter on plot advancement and answering some of the mysteries volume one set up.

Really though, Bone has won so many awards (10 Eisner, 11 Harvey) and gotten praise from so many top figures in the industry (Matt Groening, Neil Gaimon) that you do yourself an injustice if you don't give it a try.