#63 - Spiderman: Nothing Can Stop the Juggernaut 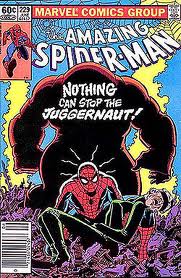 It's tough having an enemy you can't stop, one who will just keep coming at you time and time again no matter what you throw at him. In Terminator 2, it's the T-1000, a robot killing machine who personifies perseverance. In Roadrunner it Wile E Coyote, a determined individual who doesn't know the meaning of the word no.

Spiderman's T-1000 is the Juggernaut, the muscle-bound, anvil-headed brute who made his first appearance in the Xmen books. The Juggernaut has strength so mighty that he can uproot a sky scraper and use it as a cricket bat, and he's so tough that a tank could fire in his face and he'd just zip up his coat thinking it was wind.

Nothing Can Stop the Juggernaut

is a graphic novel that really lives up to its title. Over the course of two issues Spiderman tries every single thing he can think of to stop the Juggernaut kidnapping Madame Webb, but this proves so impossible for him that you start to get weary yourself just reading about Spidey's frustrated efforts.

The artwork is great and the action sequences are some of the best to ever be put in a comic book. If you're the kind of person who starts things but doesn't finish them, then you'd do well to read this graphic novel to get an idea of how heroes get things done. In this book Spiderman teaches you the definition of perseverance.

Roger Stern has a top notch reputation when it comes to story crafting in the graphic novel with classic Avengers, Captain America and superman takes to his name. That's why it really says something when a lot of comic fans credit nothing can stop the Juggernaut as one of his greatest, and it means this book fits perfectly in the top 100 list.