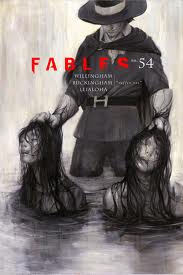 shows Snow White, Jack Horner, Bluebeard and Prince Charming as you've never seen them before. In fact, think of any story you read as a kid and this graphic novel has put a spin in it.

Some choice story lines include the dark side behind Cinderellas glitzy life style, a moral dilemma for Pinocchio as he must chose between two sides and Snow White's employment as a diplomatic emissary. You have never seen these characters behave like this before.

The fact that all the characters Bill Willingham uses are free from copyright means he can plunder the fairly tales from all over the world, pluck out an interesting character and then put his own spin on it. It makes the world he has created instantly familiar but also original and mysterious enough to draw you in.

You must have been told by now that the fairly tales by brothers Grimm and others originally came in a much darker form than the ones your grandma told you when you went to visit. Fables takes that idea and uses it to turn the fairy tale characters everybody knows into full formed people who have motivations of their own and are believable, rather than just 2D placeholders that snoop around a bear's house eating porridge.

Volume one of fables Is essentially a detective mystery comic, with Bigby, aka Big Bad Wolf, trying to get to the bottom of the disappearance of Snow White's sister, Rose Red. Willingham uses this framework to introduce us to a world that is rich in lore and stuffed full of ideas that you have need seen before, with things like Prince Charming selling his possessions after a run of bad luck and Jack Horner discovering a way to outsmart death.

This is a graphic novel for anyone who has a love for the fantastic but wants it grounded in a more adult world.