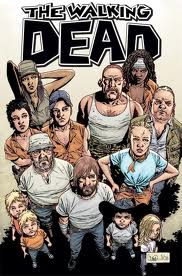 you must be a zombie yourself. Last year the first episode of the second series of the TV adaptation of Kirkman's graphic novel shattered viewings records for a cable drama. Set in and near Atlanta in the aftermath of a zombie outbreak, The Walking Dead follows Rick Grimes as he tries to find a life for himself and other survivors in the middle of what is a hell on earth.

This isn't all zombie blasting action though, just the opposite in fact. In Kirkman's comic book world it's actually not a great idea to run into a room all guns blazing, because gunshots are like a dog whistle for zombies.

Instead the Walking Dead spends 100+ issues introducing us to some great characters, some of them people you'd want to have watching your back in a zombie apocalypse, others ones that you wouldn't turn your back on even if they were locked in a steel cage with electrified bars.

The truth of it is that this graphic novel ranks with George Romero's living dead series in term of zombie fiction. It refrains from giving you split second-shock scares in favour of the long game of terrifying you at the horror of the zombie-infested new world. In one page Kirkman will give you a sense of hope and put a smile on a characters face, but in the next he will have that character trapped in a prison gym with twenty zombies.

The Walking Dead will teach you that nothing is sacred and nothing is safe in a world where humanity is the bottom of the food chain. And if you're new to the genre, It will also teach you what there is to love about reading graphic novels.