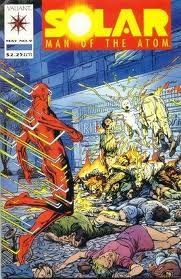 This goes a long way to explaining the emergence of the Doctor Solar, Man of the Atom graphic novel in 1962. A brilliant nuclear physicist, Dr. Raymond Solar is a key figure in the creation of new type of fusion reactor, a technology with the potential to solve all the world's power problems but also one that that poses the greatest threat to the world since Justin Beiber's mother bought him guitar lessons.

A catastrophic accident with the reactor leads Dr Solar to a heroic self-sacrifice to save the world from destruction, during which he soaks up radiation like a sponge. He becomes The Man of the Atom, a superhero who can control energy and has a mission to destroy the world’s stockpile of nuclear weapons.

Alpha and Omega is the first ten editions that kicked off this great graphic novel series. It charts Dr Solar sacrifice, destruction and rebirth and it is a sterling example of the intelligent writing and exciting artwork that produced time and time again by the now-caput Valiant Comics.

Reading it over 50 years later, it is easy to think the anti-nuclear message naive and dated. When this comic came out though it was at the cutting edge of this movement, and the bombings of Hiroshima and Nagasaki were still fresh in people’s minds. This was a comic for the times and it is one that is still a great read today.